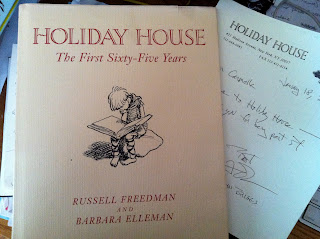 I ran out to get the newspaper yesterday and found a package on my doorstep. I’m not sure how it got there - my dogs have poor manners when it comes to someone walking up to our house. (Ax murderer, UPS guy - eh? It’s all the same to them. Bark! Bark! Bark!)

I wasn’t expecting anything so I eagerly scooped it up and brought inside. It was from my new publisher, Holiday House - a book on the house’s first sixty-five year history. Tucked inside, there was a dated, handwritten note:

Welcome to Holiday House - and thank you for being a part of this story.

It was signed John Briggs.*

Wow. How cool was that?

I guess I never really thought about myself as being a part of something bigger, part of someone else’s story and history. It was a neat feeling and an unexpected surprise. **

Later in the afternoon, I got to thinking about it. You know, if we write for children and teens aren’t we ALL part of something special and bigger than ourselves? Most of us will never make the New York Times Best Sellers list or win an award. Shoot. Some of us may never be published. (Or be published again.) But that’s okay. We’ve got one of the greatest callings in the world. To inspired, teach, reach, comfort, delight, and challenge young readers.

So in case no one has told you this lately, thank you for being part of the story. Thank you for writing the books and poems and songs and for illustrating those stories that help make the world better and brighter.

* He’s the current owner and president of Holiday House.
** I don’t mean to in any way suggest that my other publishers haven’t been awesome. Because they totally have. They show me love in different ways and I thoroughly enjoy being a part of their stories, too.
Posted by Carmella Van Vleet at 9:43 AM