Very Large Reading: Is it for You?

Before I had children, my husband used to tease me that I picked out books by the spine width. It's true, I used to love super long fantasy trilogies and densely accurate historical fiction. After the kids came along, I stopped reading those large tomes. Who has the time? Now a 250 page standalone book is more my style, and I admire how the authors get to the point.
But I'm writing a book set in the future, and I really wanted to re-read a book series set in the future that was very influential on me, Tad Williams' phenomenal Otherland series. Four books, about 500 pages each, and they have to be read in order.
Can I do it? I passed by Stephen King's Under the Dome the other day because it looked too long. Could I really re-read 2,000 pages, no matter how much I remembered loving them?
I'm happy to say I'm almost done with Book 2, and I love the series even more the second time. I fly through the pages in minutes, trying to make myself slow down and savor the prose.
So even with kids and a full-time job, if you love a book enough, the length doesn't matter. A long book can read short.
Have you ever decided not to read something because it was too long? What is the longest reading project you ever took on?
-- Kate
Posted by S. J. Laidlaw at 12:27 PM 2 comments:

How *not* to write dialogue

I was watching my favorite soap opera the other day. (Don’t judge me, people!) They were doing this recap show where the characters were sitting around talking about past events. You know like: “Remember when the son you had with the farm lady you married twenty years ago grew up and came to live with you and then accidently killed your unborn baby and tried to drive your current wife crazy?”

Man. I hate these kinds of recaps. They’re annoying. But they are a good example of what NOT to do when you’re writing.

It’s a challenge to give readers the information that they need, but resist the temptation to do it all while your characters are talking. Your characters already know each other (probably) and they already know certain things. Don’t put awkward words in their mouths.

For example: let’s suppose two brothers are on the phone, discussing their father’s sudden illness.

Brother #1: Dad is in bad shape. I think we should catch a flight home.

Brother #2: That’s a good idea. It’ll take five hours to fly from Ohio to Kansas so we should call now and start making reservations.

Brother #1: I guess I’ll have to make arrangements with my ex-wife, Kate, for my kids Michael, Todd and Mary.

Brother #2: And I’ll have to take some time off from my job as a firefighter.

This is an exaggerated example, of course, but Gaaaaaaw! Stilted, soap opera-y dialog. Let’s count the things brothers would already know and therefore wouldn't need to share while having a conversation:

*What Brother #2 does for a living

*Who Jack is and where he went to school

There are ways to sneak in bits of information using dialogue, though. Let's use revise the same example;

Brother #1: Dad is in bad shape. I think we should catch a flight home.

Brother #2: That’s a good idea. I think Southwest flies direct to KC. [We know where they're heading and that wherever they are, they must fly to get home quickly.]

Brother #1: I'll have to make arrangements with Kate. It's her weekend with the kids. [Suggests Kate and Brother are not together. Let's us know there are kids.]

Brother #2: And I’ll have to take some time off from the station. [Station could be police or fire or something else altogether. But that's okay. We can get more clues later on.]

Brother#1: I’ve called Jack. He’s on his way. [Jack must be important family member or friend.]

I know this example isn't really middle grade or young adult, but hopefully you get the idea. Just something to think about the next time you’re writing dialogue or you need to give readers information.

Sorry. Gotta run. It's time for my favorite soap op.... er, I mean my favorite research show to start.

Doing Revisions While On Vacation? 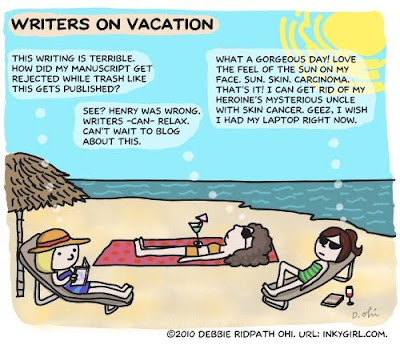 Even though I told myself I was taking a break from writing, my latest story won't leave my head. It's demanding me to work on revisions. How can I do that while I'm sightseeing and still have fun? Some tips on how to balance writing and vacationing:

1. Keep a small notebook handy for jotting down ideas about the story.
2. Bring along a printed copy of the story to make changes on during downtime (e.g. on the way from one outlet mall to another; while the kids are swimming at the hotel pool).
3. Take advantage of early mornings when others are sleeping to get out the laptop.
4. Turn off words that won't stop by digging into a stack of good reads.
5. Always stop for ice cream.

Aack! Okay, now I'm blogging while on vacation. This has got to stop. But I do have to admit, working on my writing without all the pressures of work and the daily routine is a lot of fun.

Here's a brilliant idea - a virtual conference! (I'm all for attending conferences in my pj's and bare feet.) I've been hanging out at this site, soaking up all the great information, for the last couple of days. Seriously, check it out and bring a notebook because you're gonna want to take notes.
http://writeoncon.com/
~Carmella
Posted by S. J. Laidlaw at 8:50 AM 1 comment:

Ask me how to fix a running toilet

The toilet in our master bathroom has been running on and off for months now. Last week, it began running all the time. It was driving me nuts and, more importantly, wasting a lot of water. Something had to be done. So I read up on the subject online and set to work.

Now, I’m not what you’d call a “handy” person. I don’t know the real names of tools. I like to call things doo-dads or thingyamajigs. But I managed to find the problem. Sadly, in the process, I broke the tall thing with the floating ball on the long arm. (See, you knew what I was talking about even though I didn’t use the proper name, right?) I went off to the store and got replacement parts. It turns out that would be just the first of several trips because as one thing got fixed, another broke.

In the end, I spent the better part of two days, tearing apart my toilet tank and learning how to put it back together. It was way more than I wanted to know, but I did it. And now the toilet doesn’t run. (It still leaks a little, but I’m working on that, too.)

As I was scrubbing the black gunk that used to be gaskets off my hands, I discovered that this whole experience was kind of like revising a novel.

Sometimes, you know something isn’t working. You can’t quite put your finger on it, but you set off to find the problem and then the solution. But things turn out to be more complicated than you anticipated and the only way to really fix things is to tear the whole, darn thing apart and put it back together.

It’s not pretty - or fun - but it’s the only way to get the job done right. 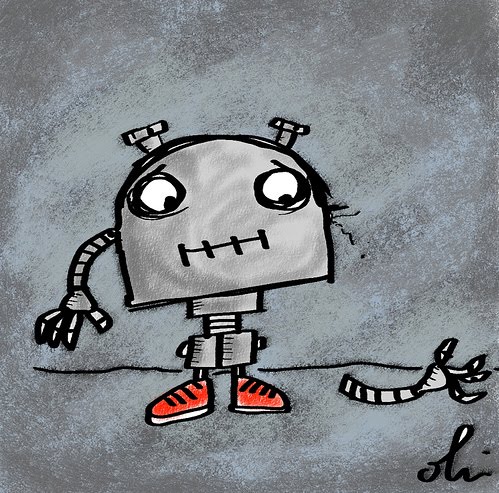 The MiGs would like to congratulate our very own, extremely talented Debbie Ridpath Ohi! What did she do, you ask? Why, she was brave enough to enter this year's SCBWI's Illustrator Showcase. And, oh we should also mention that she was one of two Runner Up / Honor Award winners!!! She also won the Mentorship Award Program. To win two awards like that, we hear, is quite unusual.
No one had to tell us how special and talented Debbie is (we already knew, duh!), but we're thrilled other people are paying attention. We just know big things are right around the corner for Debbie.
And we couldn't be more proud!
~Carmella, Christina, Kate, Susan and Andrea
Posted by S. J. Laidlaw at 11:54 AM 2 comments:

Email ThisBlogThis!Share to TwitterShare to FacebookShare to Pinterest
Newer Posts Older Posts Home
Subscribe to: Posts (Atom)
Welcome to the home of the MiG Writers, a group of six middle grade and YA authors who critique each other's work as well as post about the craft and business of writing for young people: Kate Fall, Christina Farley, Susan Laidlaw, Andrea Mack, Debbie Ridpath Ohi, Carmella Van Vleet.
Find out more about us: MiG Writers bios