Confessions of a former “Pantser”

Pantser - someone who writes without a detailed outline. In other words, they write by the seat of their pants.

Plotter - someone who plots out or outlines their story before beginning the writing process.

I’ve completed two novels. (Three if you count my very first attempt eighteen years ago - and I so don’t.) I started the first one as part of an online class. Even though one of the assignments was to make an outline, I more-or-less, “pantsed” by way through it. I loved the idea of having a basic premise or characters and following them into the wide unknown. Let them tell me the story, I thought. It took me about a year to write the book. Correction: it took me a year to write the first draft. I’m still working on revisions.

Pantsing worked well so I did the same thing with my second book. I loved my MC’s voice and simply followed her down a bunch of roads. Oh, I knew where the two of use would eventually end up; I had a destination clearly in mind. But the journey was a wide-open adventure. From start (idea) to finish (signing with an agent) that book took me about two years and included help from a freelance editor. (The amazingly gifted Diane Bailey)

Then I started Book #3. Again, I had an end place in mind and a general idea about who my MC was and merrily pantsed along. Only, this time, things didn’t go well. I had false start after false start. Part of the issue was that I simply had the wrong plot for the right story. (That's a whole other post.) But it also became increasingly clear to me that something about my process wasn’t working. I was growing more and more frustrated and after six months, I barely had 30 pages I was willing to show anyone.

In all other aspects of my life, I am a planner. I was girl who knew what she wanted to do for a living and who she wanted to marry at age sixteen. I named my three kids well before they were born and didn’t change my mind (like my mother swore I would!) I live by lists, buy a certain calendar every year because it has large “day” boxes and stress endlessly over details. So, why on Earth wasn’t I planning when I was writing?

I decided to take shake things up and try something new. I found an online plot class taught by the awesome Rhonda Helms and signed up. I was desperate so when Rhonda walked us through how to plot out chapters (or scenes, if that’s they way you work) and asked us to figure out our plot twists (who know, those events that send the story off in a different direction), I sighed and thought, Fine, I’ll give it a try.

Long story, short - miracle (cue the choir)!!! After I went through that outlining process and then *clears throat* totally revamped my original plot, I FINALLY found my footing. I started writing again in mid-January. I’m quickly closing in on the 100 page mark. Which is remarkable when you consider my 30 pages in 6 month pace of before. (Ugh.)

Of course, having a new direction is probably helping a great deal. But I can’t deny that the outline is proving to be very valuable as well. I'm sold and I don't think I'll ever go back to being a pantser.

I thought planning would hinder my creativity but it’s just the opposite. I find that having a detailed outline (even if I’m not following it exactly) is freeing me up from the panic of “What comes next?!” and I tend to be able to focus more on the task at hand. Today, my goal is THIS scene and only this scene. I don’t feel like my juggling act is all about to fall apart because I know what I need to keep track of. I also can see (literally) if I’m including enough of the subplot or have too many scenes set in the same location or dialog heavy chapters and so forth. Because the details are taken care of, I’m enjoying the process a thousand times more. And as we all know, happy writer = great work.

So here’s my suggestion: If you’re a go-wherever-the-muse-takes-me kind of writer and it’s not working, why not try something new?

It might be just the kick in the pants you need. (See what I did there? haha) I've been with the MiG Writers for a while now but so far, have only met one of my MiG pals in person: Carmella Van Vleet.

Yesterday, Andrea Mack and I finally met! E-mail and social media is great, but there's something about meeting people face-to-face that is so much more satisfying. Andrea just wrote about our get-together in her blog as well. 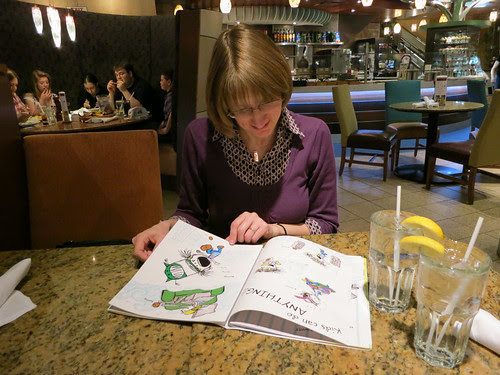 Lots of talk about kid lit and writing and our amazing writing group. Andrea browsed my I'M BORED proofs. We had lots of dessert. :-)

Someday, it would wonderful if ALL the MiG writers could get together in person. Some of us are already planning to attend the SCBWI conference in NYC next January, which will be fun.

Anyway, do check out Andrea's blog for writers and readers, That's Another Story. You can see some of her published books to the left; click the image to be taken to her website.

The other day at taekwondo, my instructor talked about why we keep training. Some days - especially the ones when my middle-aged body is complaining very loudly about being thrown around like a ragdoll - I wonder what the heck I’m still doing at the dojang. But I keep showing up for what my instructor calls “moments of enlightenment.”

I think I’ll call these MOE’s. (Kind of cute, huh?) They are the brief moments when all our training comes together in just the right way and we do something like pull off the perfect block or land the perfect kick or do a form with “no mind” and it feels amazing. Even after 6 1/2 years of training, I don’t have a lot of MOE’s during a class. I always seem to have a few, though, and just having the taste is enough to keep me coming back.

I think writing is the same way. Every day I put my butt in the chair, open a file and start writing. It’s so hard because even though I’ve been doing this a long time, my skills don’t quite measure up to my dreams. But they’re getting closer. And every once in a while I’ll land that perfect sentence or throw that perfect word down on the page. And. It. Feels. Amazing.

And that’s why I keep writing.

What keeps you coming back to writing?

If you write middle grade books and you haven't seen the recent posts by literary agent Michael Bourret and children's book editor Molly O'Neill you should check them out. Here's a taste:

From Part 1: Everything you ever wanted to know about middle grade…and were willing to ask:

Molly O'Neill: "I think about middle grade being the time when a lot of readers discover “that book”—the one that turns them into a lifelong reader, or explodes their world open with new ideas, or shares exactly the right truth at exactly the right moment in a way they’ll never forget."

From Everything You Ever Wanted To Know About Middle Grade, Part 2: Technology and Gender and Marketing, Oh My!

Michael Bourret: "One of the great things about middle grade is that it seems much less susceptible to big trends--you don't have the same sort of vampire, werewolf, dystopian waves that you see on the YA side."

This is such an amazing opportunity to learn more about writing middle grade - I'm off to re-read these posts again.
Posted by Andrea Mack at 9:02 AM 3 comments:

Winner and a great idea

Thank you very much, everyone, for commenting. (And to Linda Joy for stopping by!) Laura, I’ll be in touch shortly to get your address.

And now for the great idea from my daughter. Last night I was complaining because I was having one of those “My book sucks” days. She asked me if I’d seen that commercial where the dieting man hires the mean girls from his daughter’s junior high to follow him around and make comments when he eats something unhealthy. They say something like, “Dude. Eww. That is so gross.”

“Wouldn’t be cool if you could hire someone to follow you around and say nice things all the time, Mom?” my daughter asked.

She's right. Wouldn’t that be awesome?

My daughter and I decided the group should say, “Girl. OMG. That chapter is sooo good!”

Just think about how much more - and better - work we could get done if we had constant encouragement. Maybe next time I hear that “I suck” voice in my head, I’ll stop and do my best 14-year-old nice girl impression.

Posted by Carmella Van Vleet at 9:53 AM 5 comments:

Email ThisBlogThis!Share to TwitterShare to FacebookShare to Pinterest
Labels: contest, encouragment, writing process
Newer Posts Older Posts Home
Subscribe to: Posts (Atom)
Welcome to the home of the MiG Writers, a group of six middle grade and YA authors who critique each other's work as well as post about the craft and business of writing for young people: Kate Fall, Christina Farley, Susan Laidlaw, Andrea Mack, Debbie Ridpath Ohi, Carmella Van Vleet.
Find out more about us: MiG Writers bios