I've been trying to revise the ending of my middle grade novel because I want it to be really amazing. What I had before was okay, but not memorable enough. I'm working on making it stronger and I thought I'd share a couple of the questions I've been asking myself.

What does the reader want to happen? How much of that do I want to show the reader?

I think that part of creating an emotionally satisfying ending is to give the reader a lot of what they want to happen. That doesn't mean I have to do it in a straightforward way. I can throw in some unexpected twists. Since I write MG, I think my readers do want a mostly happy ending. They want the heroine come out as a winner and the bad guys get punished. The main character should mostly get what she wants.

Thinking this way also shows me which scenes will be most important to the reader. Those are the scenes I don't want to sum up in a few lines or rush through. I can create suspense and stretch out those scenes to build up more of an emotional impact.

What is the simplest ending that will work for my story?
I want to wrap up most of the the loose ends so the reader can feel the problems are resolved. Even though I'm throwing in some unexpected twists, I think the book will be strongest if it ends without too much complexity.
After all, if the route to the final scene is too convoluted, the reader will get caught up in following the thought process instead of the emotional experience.

What questions do you ask yourself when you're revising the ending?
Posted by Andrea Mack at 10:14 AM 7 comments:

I visited my daughter’s school this morning to do a workshop on revision. The kid were high schoolers and I think they liked me because I let them play with Play Dough the whole time. I was trying to show them revision is nothing more than playing with what you already have. (The dough was supposed to represent your draft.) If nothing else, maybe they thought I was cool because I wore a shirt that showed off my wrist tattoo. (Please tell me tattoos are still cool!)
Anyway, I brought a few examples of my own writing to share. During the part of the lesson where I talked about revising your “take away” value, I began to read an essay I wrote about Baylee Almon.
“I know Baylee,” I read, “in the way most people know Baylee - through a photo. Baylee Almon was the limp baby with tiny, white socks, who was carried by a firefighter away from the Alfred Murrah Federal Building in Oklahoma City on April 19, 1995. She was one year and one day old when she died.”
“Wait,” one of the kids interrupted, “Baylee was real?”
I looked at the teacher and he looked at me. Without any further communication than that, the teacher went to his computer and pulled up the photo along with a photo of the decimated building. The kids - who were all babies when the Oklahoma bombing happened - were shocked and angry and full of questions. So I dropped the lesson on revision and we spent a few mintues talking about the tragedy.
I wasn’t frustrated by the impromptu history lesson. As a former teacher and parent I know the best learning takes place when you least except it and don’t plan for it.
Besides, writing is like that, too. Sometimes you start off one path and wander onto another. And more often than not, that new path is the one you needed to take all along.

Writing- A Way of Life

I started writing 5 years ago, but when I started, it was more of a hobby than anything serious. I had made a list of the top 100 things I wanted to do before I died (morbid, I know) and writing a novel was on that list. I started checking things off my list (like walking on the Wall of China!) but lurking in the back of my mind was #14- Write a novel.
Easy peasy right? Hardly. It wasn’t easy. And I had NO idea what I was doing. Even today I’ve got to say to anyone who has written a novel “Wow.” Because it is a wow. Just the mere fact of sitting your bottom into the chair and being disciplined enough to be able to write “The End” is huge. Never let someone tell you otherwise.
I go back and read some of the pages from that first book atrocity and cringe.
And smile.
Because that’s where it all started. In the awfulness of that first book it made me the writer I am today. It really is an encouragement to compare my writing then and now. So if you’re ever feeling down, go back and read some of your first pieces of writing. You’re going to feel a whole lot better.
Then there’s the fact that this is only the beginning. Think of how much better I’ll be in another five years. Because it’s a never ending process. Reading, writing, learning, listening.
Steven Malk gave me some fantastic advice at a writing conference. He reminded me to never rush my writing career. Take my time to write my very best because isn’t that what I want the world be to reading?
My very best.
~ Christina
Posted by Christina Farley at 5:52 AM 11 comments:

A Story in Pictures 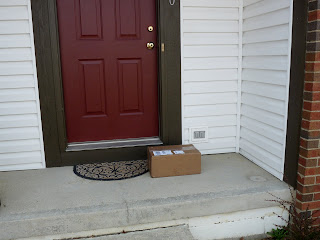 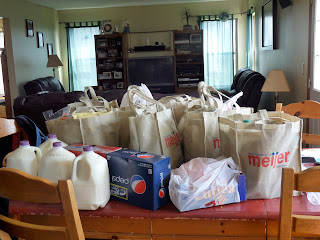 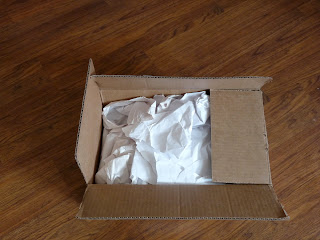 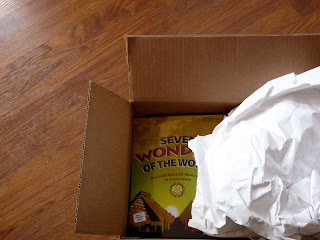 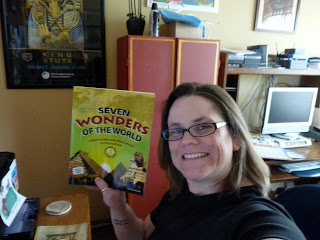 (Yep. That would be me and my new book, Seven Wonders of the World: Discover Amazing Monuments to Civilization (Nomad Press). Love the cover. Love the illustrations. Love days like this!)
Posted by S. J. Laidlaw at 1:51 PM 10 comments:

Just the other day, us MiGs were chatting (via email), and we got talking about food and writing. Okay. I admit it. I eat a LOT when I write. The usual healthy stuff like Twizzlers, peppermint patties, dark chocolate.
And drinks. Coffee, Coke Zero, ice water.
The thing I found is that depending on what I eat, it sets me in a particular mood. Like if I want my characters to be annoying and obnoxious, I just don’t eat chocolate. Maybe nothing at all. Because obviously I’m happy when eating chocolate.
If I eat coffee, I tend to be more methodical.
Twizzlers? Light and carefree.
Peppermint patties? Overdramatic evidently. (That one is for you Andrea!)
Am I crazy? Probably. But what I’m dying to know is if you are as crazy as me and use food for inspiration too. What types of foods do you eat while you write and do they put you in a particular mood?
~Christina
Posted by Christina Farley at 5:54 AM 4 comments:

I’ve been thinking a lot about patience lately. It’s partly because we’ve been playing the run-to-the-mailbox game for the last few weeks, waiting for college acceptance letters for my oldest son. (Thankfully, all offers have been made and he’s made his decision. But that’s another post.) Another reason “patience” has been on my mind is because my  thirteen year old will be taking the first part of her second degree junior black belt test this Saturday.
This test has been a real lesson in patience - for her and for me. She was prepared to test six months ago but then a broken toe and a sudden switch to a new school pushed testing aside. Abbey was very disappointed. Especially since I went ahead and tested for my second degree test without her. (I know. Bad Mom!) She announced that she was giving up taekwondo altogether, claiming she couldn’t wait any longer and that all her hard work was for nothing.
For months, I talked, threatened, bribed, argued and talked some more. But no matter what I said, I couldn’t convince her that waiting six months for the next testing time to come around again was not a big deal. I told her, “April will come no matter what you do. Which would you regret more: showing up for class and training or not testing?” **
Today, after another day of frustration at the keyboard, I realized I need to start taking my own advice.
Months ago, I started a new project. Though I’m very excited about it, writing has been agonizingly S L O W. Like “Yippee, I wrote a decent paragraph today” slow. I’ve found myself wondering if it’ll ever get it done. It’s tempting to just throw in the towel and decide I’m not waiting any longer for an agent to take me on or an editor to make an offer.
But next week, next month and even next year will come regardless if I’m writing or not. So I need to decide - how do I want to spend my time. I may be plodding (or should that be plotting, ha ha) along but progress is progress.
A journey of a thousand pages starts with a single word and - sometimes - moves one paragraph at a time. And that’s okay.
~Carmella
** I’m under no illusion that my advice changed my daughter’s mind about testing. She’s a teenager after all and therefor I know nothing. :-)
Posted by S. J. Laidlaw at 5:43 PM 3 comments:

Looking Back for Inspiration

Lately, I've been feeling like the revisions on my current novel are taking forever. Guess what? I checked my notes and discovered I started writing the first draft last March. So, I've actually only been working on this project for a year (plus probably a few months where the idea floated around in my head and on the pages of my notebook).

Wow! That's hardly any time compared to my first novel.  It took five years before I reached the feeling that I'd completed it, or didn't know what else to do. I must be learning something.

Sometimes it can be encouraging to step back and look at the bigger picture. I often get caught up in the day-to-day details of writing, which have so many ups and downs. Sometimes a lot of downs. But a little over a year seems pretty reasonable for writing and revising a novel. Now I'm inspired to get my revisions finished!

Here are my goals for April:

2. Polish Novel #4. The feedback I'm getting from critique buddies suggests it might be ready to start subbing soon.

3. Write a query, pitch sentence and synopsis for Novel #4.

4. Oh yeah. And definitely decide on which title I'm going to use.

How is your writing project coming along? Have you ever found inspiration from looking back at what you've accomplished? What goals do you have for the coming month?
Posted by Andrea Mack at 7:15 AM 5 comments: