My oldest is a senior this year, which means we are knee-deep in (dum dum dum!) college application season. Because my son is applying to some programs that require essays above and beyond the basic Common App essay, I’ve been getting loads of critique practice. I’ve also been getting loads of eye rolls and looks that scream, “Mom doesn’t know what she’s talking about even though she’s been a professional writer for 12 years,” too. But I digress.
One essay in particular was a challenge for him. It was for a college that has a unique degree that combines my son’s two passions: science and music.  He *really* wants to attend this college but his first draft was, frankly, dull. (And this is from his mother!) There was no sparkle, no life. No HIM.
So I handed it back to him and told him to start over.
I encouraged him to think about the moment when he really and truly realized he loved physics and wanted to spend his life learning about the universe and everything in it. And how he’d fallen in love with music the moment he laid his fingers on the keys of a piano and then later fell in love with the bassoon. I told him to write from the heart and not to put down what he thought the admission folks would want to hear.
The result was the terrific essay that really shines, full of terrific metaphors and lively descriptions and deep insight. And, more importantly, it carries my son’s passionate voice. There’s no way the admissions committee will turn him down - of course, I’m a wee bit prejudiced!
I think this is an important lesson for all of us. As writers, we sometimes write what we think publishers or readers want. That work may be okay but we’ll always fall flat if we don’t pour ourselves into our writing. Our work needs passion. Our passion. So we’d better pick ideas we genuinely love.  If we don’t love what we’re writing, the reader will know.
And there’ll always be some editor or agent handing our work back and telling us, “Start over.”
Posted by S. J. Laidlaw at 11:10 AM 2 comments:

I tested for my 2nd degree black belt in taekwondo this past weekend. At the graduation, my instructor told the class that having a black belt was like having a 300 piece puzzle dumped out on a table. He said something like, “You have all these skills and now you have to figure out how they fit together.”
I’ve been feeling this way about my current novel. (If you can call it that; I’m only five, lousy pages into it. Sigh.) I have all these ideas and scenes and bits of research and thoughts scattered on the figurative table in front of me. And the challenge is putting them all together when I’m not even sure how the final picture should look.
I don’t know about you, but I’m terrible at jigsaw puzzles. I just don’t have the patience. But I guess I’ll just what I usually do - find those edge pieces first.
Any other tips for putting those novel pieces together?
~Carmella
Posted by S. J. Laidlaw at 8:37 AM 4 comments:

How to Handle Rejection

I try not to let it get me down, but sometimes it does. Even though I've been pretending ever since I sent out my query letters that it doesn't matter so much. I can always write another novel (yeah, in another four years). Here are some thoughts about how to ease the sting of a rejection:

1. Do something creative with the rejection letters, like give them to your new puppy and see what he thinks about it.

2. Read blogs about rejection written by other writers. It helps to know there are others out there feeling the same way.

3. Twizzlers. Chocolate. Whatever. Treat yourself to something delicious.

4. Send out more queries. One letter is just one person's opinion.

Actually, the thing that works best for me is to immerse myself in a new and even better writing project. I'll go back and fix up the rejected one someday, but the more writing I do, the more my writing will improve (especially with my awesome critique buddies to give me feedback). The next book I write could be The One.

What's your best tip for dealing with rejections?

Motivation. If you don’t have it, you’re not getting anything done. And if your character doesn’t have it, your story isn’t going anywhere. One of the difficulties I have in writing middle grade fiction is in getting the right motivation for my characters.

A character’s motivation has to be believable. For middle grade, that means you need to know what 9- to 12-year-olds want or what’s important to them. There are lots of writing books that give you advice on how to do that. But I think you also need to know two more things:

1) what middle graders think they can do

2) what they are able to do

These often don’t match up, which is a good thing, because it can create conflict in your story. But if either of them is too unrealistic, you run the risk of setting up a situation that won’t be believable for your readers.

I’ve noticed that sometimes middle graders seem to have a kind of naïve confidence, where they are sure something will be a piece of cake and then find out it’s not. Like when they’ve seen an adult do something lots of times, then try it themselves, and realize it’s a lot harder than they thought. Do they give up? Or do they try harder? There’s some motivation and conflict.

On the other hand, sometimes adults or older siblings underestimate what kids can do. For example, my 11-year-old shows much more initiative and independence when her older sister isn’t around. To a point. There are things she wouldn’t be able to do and knows it. But there are other things she’ll try because she thinks she can. There’s a lot of “trying it out to see what happens” with middle graders.

As an adult writing for children, it’s hard to shut out the perspective of "knowing myself" that comes from having so many more life experiences. But I think it’s important to try. To get the motivation right, I’m going to delve into the minds of my characters and work on what they think they are able to do, then show whether they can as the story develops. 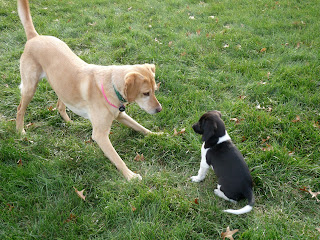 If you read this blog regularly you know that, last week, I was contemplating a puppy. Big surprise. My resolve to remain a one-pet household didn’t last long. (Yeah. Like two minutes after I posted my last blog entry!) The little guy’s name is Jack.
As you can see from the photo, my older dog hasn’t quite figured him out yet. Bodie wants to play and Jack is still too freaked out by Bodie’s size to join in. I thinking starting a new book is like that. We want to play  - it looks like so much fun - but it also seems too huge to tackle.
I’m really struggling with this anxiety these days. I finished my second book over a month ago and though I’ve settled on my next book idea, I haven’t been able to get much actually written. I always seem to go through a “How do I do this again?” phrase when I start a big project. But for whatever reason, my writing mojo is still stalled. I need a jump start.
How do you handle it when you’re sitting in idle?
~Carmella
Posted by S. J. Laidlaw at 10:14 AM 1 comment:

We MiGs have been big on sharing our goals with each other over the years. Debbie keeps up a special page dedicated for our monthly goals and year goals. It's been a great way to keep ourselves accountable and cheer each other on.


There's something about putting your goals down, not only on paper, but out there on the web. Suddenly I feel as if I've got an even bigger group of people to keep me accountable than just myself.

And since this is NaNo Writing Month, it seems fitting to share my goals with you guys. I had grand plans to start writing my next book (so excited about it, too!), but I've decided to put that on hold until January.

This month, I'm doing another big revision of GILDED, my novel set in Korea. I'm cutting out characters, adding deeper levels to the existing ones and amping up the romance. It won't be a full rewrite like I at first thought I needed, but there will be many chapters that will have a whole new look and new twist.

It's a big job. And I'm going to finish it this month!

Will you keep me accountable? You better!

How about you? Are you doing NaNo? Any tough goals that you are hoping to finish?

Email ThisBlogThis!Share to TwitterShare to FacebookShare to Pinterest
Labels: Christina, goals, writing life
Newer Posts Older Posts Home
Subscribe to: Posts (Atom)
Welcome to the home of the MiG Writers, a group of six middle grade and YA authors who critique each other's work as well as post about the craft and business of writing for young people: Kate Fall, Christina Farley, Susan Laidlaw, Andrea Mack, Debbie Ridpath Ohi, Carmella Van Vleet.
Find out more about us: MiG Writers bios