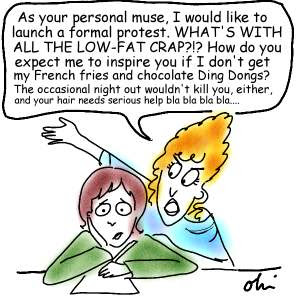 From the Inkygirl archives.

As I posted this comic, I realized that this actually ties in with Andrea's post last Friday. I know some people will disagree, but I think that everything we read influences us as writers. Maybe not directly (e.g. reading a Stephen King novel isn't necessarily going to make me write like Stephen King), but it does go into the melting pot that is my creative muse.

I read a wide range of books, from popcorn-type beach reads to nonfiction and literary, but I tend to mostly read books written for young people. Not just because that's what I write but (as Andrea says) because I enjoy them. When I'm writing a novel, though, I try not to read too many books by the same author in a row because I'm worried that that author's style will influence my own a little too much.