An Interview with Susan J. Laidlaw, Author of AN INFIDEL IN PARADISE 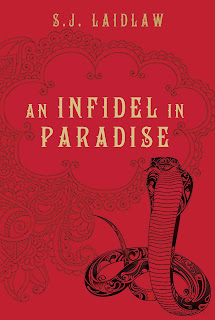 All of us at MiG Writer's are so excited because Susan Laidlaw's YA novel, AN INFIDEL IN PARADISE (published by Tundra Books) is out today!
It's available from Tundra Books  and the usual places such as Amazon, Barnes & Noble and Chapters-Indigo.
I interviewed Susan about her writing and some of the challenges she experienced when writing the book:

Share a little about how you ended up as a writer.

I've wanted to be a writer since I was a child. I actually studied journalism for a year but switched to English when I realized I wanted to write fiction. When I graduated, I took off to Africa as a volunteer teacher. I discovered I loved teaching but more than that I discovered I loved talking to kids and helping them with their problems, so after three years I returned to Canada and did a Masters in Clinical Social Work. I've been an adolescent counselor ever since but I continued to write, mostly for my own pleasure, but occasionally for professional purposes.

I was working at a counseling center in Taiwan and writing articles on parenting when a colleague approached me and said he'd read my articles and wondered if I'd ever thought of writing fiction. While my articles were non-fiction, they were quite humorous and I guess that's what appealed to him. In any case, he'd formed an SCBWI critique group and he wanted me to join. I wrote the first chapter of AN INFIDEL IN PARADISE in preparation for that group.

How did the idea for your story emerge?

I've lived overseas in Asia, Africa and Europe for twenty-two years, so most of the kids I've counseled are like the protagonist in my book. Due to the nature of their parents' jobs, they change countries frequently. By the time they hit their teen years, which is usually when I meet them, they may have lived in a half a dozen different countries and spent very little time in their "home" country.

Some kids find moving around a rewarding and enriching experience but many find leaving friends behind, and having to start over every couple of years, painful and stressful. Obviously, the ones who have more difficulty making the transitions are the ones I see in counseling. The constant moves prevent them from developing a strong support network of friends or extended family. They've often spent little time in the "home country," so they don't have a strong sense of connectedness with their homeland either. This lack of a consistency in friendship, family and culture can cause problems in their identity formation.

Identity, as you know, develops throughout childhood, and is our shared sense of values and beliefs that inform the way we relate to, and behave in, the world. Identity is created through our interactions with those around us, so we usually have a sense of belonging with those who have grown up around us, through shared beliefs, values, and ways of behaving. This forms the basis of our "national identity," though it's not limited to national identity and may include our religion, our ethnicity, or other influences that have been strong and consistent throughout our childhood.

Kids, like those I've worked with and the protagonist in my book, may not have this sense of identity because they've had no consistency of shared values and beliefs with those around them. The only constant in their lives is their nuclear family but they often feel alienated from their own parents since they don't share their parents'"national identity," any more than they share the identity of people in the country they happen to be living in at any one time. 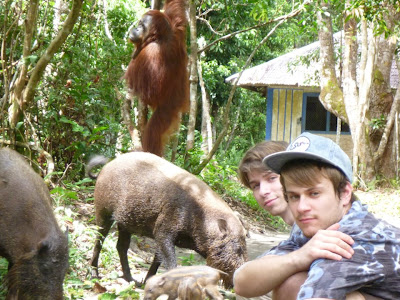 Both of my sons grew up overseas and are examples of this phenomenon. My eldest will tell you he's Asian, though he's a green-eyed blonde. My youngest is a chameleon. He'll take on the identity of those around him. Chameleons are very common in the international lifestyle and often the most successful at transitioning from one culture to another, but even when surrounded by friends, they may still feel profoundly isolated because looking and acting like everyone else isn't the same as actually feeling connected.

One of the things rotational kids find particularly hurtful is the inability of those around them to understand how difficult it is to keep starting over and to never feel at home anywhere. Home country peers, teachers, sometimes even their own parents, will just tell them to stop whining. But the depression, alienation and anger that these children feel is a well-documented result of their rotational lifestyle. Psychologists, like David Pollock, Ruth Van Reken and Ruth Hill Useem, to name just a few, have been studying and documenting these psychological ramifications for more than fifty years. What was the most challenging aspect of writing your book?

The hardest thing about writing this book was to make Emma, a rotational kid, comprehensible to people who haven't had her experience of moving around. Emma's an angry, alienated and depressed kid, in the throes of culture shock. But just like the hundreds of kids I've worked with, she's going to confront people who don't have the ability to empathize with her situation.

Rotational kids become very good at faking it with those who don't share their nomadic existence. They know they're not going to be understood, so they learn not to talk about themselves. I wanted to break down this barrier and hopefully make it a little easier for these kids to talk about what they're going through. At a minimum, I want them to be able to read a book that reflects their life experience.

I don't think feeling like an outsider is unique to rotational kids though. I know a lot of young people feel this way and I hope they'll identify with Emma, despite the differences in lifestyles. Rotational kids don't have a monopoly on challenging childhoods. Kids can suffer so many traumas, like bullying, family breakdown, death of a loved one, peer pressure. I don't think a reader needs to have experienced Emma's life to identify with her pain. They only need to be capable of empathy and most teens have plenty of that.


Each book I write teaches me something about the world, myself or the process of writing. What did you learn through writing your book?

I think what I learned most from this experience is how weird my life experience is. I've lived in a bit of a bubble overseas. Most of the people I know move around like I do. As hard as it sometimes is to explain the anger of a rotational child to her own parents, it's a million times harder to explain it to someone who's never experienced culture shock, or left behind cherished friends, or longed for a sense of connectedness to someone or something. 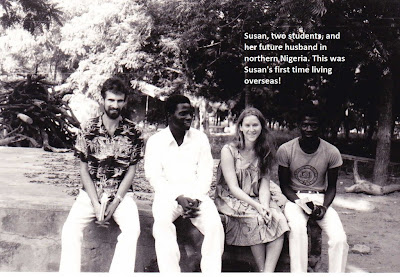 I went overseas when I was twenty-one. I lived in a tiny village, in a very Islamic part of Northern Nigeria. I had no electricity, no phone, no way to connect with family and friends back home. I think perhaps that experience changed me in a fundamental way that I didn't entirely understand until I wrote this book, but when a kid comes into my office, angry or depressed because her parents have moved her yet again, I feel an immediate connection that transcends my usual empathetic response to an unhappy kid. As much as I love moving around, and despite the fact that I willfully subjected my own children to this lifestyle, I feel that child's pain with every fibre of my being. But can I communicate that to a reader in a meaningful way? There's the challenge.


Because I love reading as much as I love to write, I'm always curious about what other people like to read. Do you have any favourite books?

I love anything by Rohinton Mistry. A FINE BALANCE is my favourite contemporary novel. BEHIND THE BEAUTIFUL FOREVERS by Katherine Boo is my favourite non-fiction. Beyond that, I have so many writers I love it would be unfair to mention any of them. 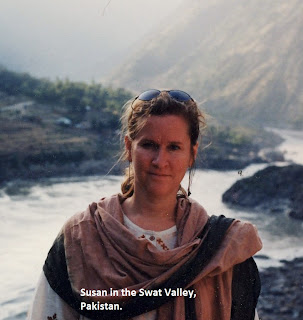 Do you have anything else you'd like to tell us about writing your book or about your next project?

One thing I've been asked a lot is how much of Emma's story is true. The short answer is that the majority of the story actually happened in one way or another. I've talked a lot about how Emma is based on a lot of kids I've worked with over the years, so you've probably already caught on that I'm not really a very imaginative person.
I also lived in Islamabad, the setting of AN INFIDEL IN PARADISE, for two years. I lived on the Canadian Compound, where Emma lives. It was much as I described it and yes, we really did get cobras in the yard and the guards really did shoot them. Children did pick through garbage behind our compound. I came across them, as Emma did and responded in much the same way.
The bombings and evacuations in the story happened while we lived there. I changed the timeline but not the details. The frequent demonstrations and the way they were dealt with at the school is also factual.
Even some of the conversations Emma had in the story were based on ones I had myself with Pakistani friends. Her trip to the market, for example, mirrored my own.
I don't know if I got all the details right but my eldest said recently that for him, reading the story felt like "going home." From a kid who rarely knows where "home" is, this felt like high praise, and maybe that's enough.

For more about Susan, please visit her website at www.susanjlaidlaw.com.

You can also read more about Susan's writing process and her book in an interview with Debbie Ridpath Ohi, Interview With YA Author S.J. Laidlaw About Process, Persistence and AN INFIDEL IN PARADISE.

Email ThisBlogThis!Share to TwitterShare to FacebookShare to Pinterest
Labels: An Infidel in Paradise, Susan Laidlaw