Grace in the Face of Disappointment 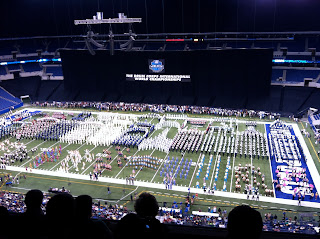 This is a photo of 1,800 kids standing on the field of Lucas Oil Stadium in Indianapolis right before the 2012 Drum Corps International World championships were announced. It’s kind of hard photo to look at because I think it’s missing some people - my son and his marching corps.

If you read my last blog post, you know that my son and the rest of the Blue Stars were in the semi-finals this past week. We got word late Friday afternoon that they missed the finals by three-tenths of a point. Outscored at the worst possible time by another corps that had been trailing them all summer. Noticed that I used the word “outscored” and not “beat.” That’s because there seems to be a consensus the Blue Stars were victims of some politics.

Lest you think I am a prejudice mom, I would like to share that numerous people from other corps stopped me at the finals - I was wearing a Blue Stars shirt and hat - and told me they felt the group got robbed. (I wasn't the only one this happened to either.) And, most telling, an alum from the other corps made it a point to come to our website and post on the message board that he thought what happened was wrong.

But this isn’t a sour grapes or “let’s cry foul!” post. It’s about grace in the face of disappointment.

When my son texted me to let us know he wasn’t moving onto the finals, I knew he was deeply disappointed. How could he not be? He and his friends had worked all year and poured their hearts and souls into their music. Despite spending a small fortune on tickets, I told my son I’d try to sell them or let them go unused so he didn’t have to sit in the stadium and watch other kids get to do what he wanted to do.

My son said no and decided to join us in the stands, proudly wearing his Blue Stars jacket to boot. When the other corps came on and performed, my son politely clapped. “They worked just as hard,” he said. “We shouldn’t take that away from them.” Because I’m not that big of a person, I didn’t clap. (But I did try to remember that as sad as the Blue Stars were that's how happy the members of the other corps were; the anger should be at the judges and not the kids.) When they were done, the worst thing my son said was that he thought the Blue Stars show was stronger. I was amazed and humbled by his attitude and told him so. I'm pretty sure I wouldn't have been nearly as gracious.

Other corps came on the field and performed. And as the night went on, I noticed something really cool. Instead of being all depressed and resentful, my son was enjoying himself. In fact, during one corps show he could barely contain his excitement as they pulled off a drill movement that is as impressive to watch as it is to do. He become animated and excitedly telling me about the music and moves. When the group was done, he stood on his feet and cheered. And that’s when I was struck with this realization: he’s a fan first.

His passion for marching and music is what brought him to the marching corps to begin with and he was just honored to be a small part of it. Because he'd been in the trenches himself, he knew what it took and what it meant for those other kids to be there in the finals.

Often times, we don’t get what we want or fall short of a goal. The dream agent says no. The editor sends us a form rejection. Or the acquisitions committee takes a pass. The reviews are less than stellar. The book doesn’t sell or goes out of print. And it’s difficult. Very, very difficult to sit in the stands and watch other people get what we want.

We work just as hard.
We want it just as much.
We think our work is just as good - and, often times, it is.

But there are politics, bad timing and subjective judges and sometimes things simply don’t go in our favor. It’s not a reflection of us or of the other writer.

When we fall short, we shouldn’t let our disappointment take away from someone else’s work. We should not only enjoy but celebrate other writers’ success. Stand up and cheer loudly because that’s what we’d like when it’s finally our turn.

I don’t know about you, but I came to writing because I love books. But even so, I don’t read nearly enough these days. That’s in part because I find it hard not to feel a little envious. But I’m going to try to work on that. Being a story teller is one of the most honorable callings and I’m blessed to be a part of it.

Be a fan first. This is what my son taught me this past weekend.
Posted by Carmella Van Vleet at 11:43 AM